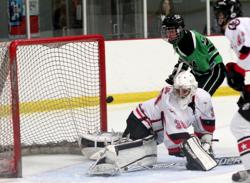 The Pikes Peak Miner's kicked off their five game weekend on Friday against the Pursuit of Excellence, and started off the weekend with forward, Jake Eubank, scoring an unassisted goal, giving the Miners a 1-0 lead. With only 8 seconds left in the first, Vlad Zhidikihk (assist Bever) quickly put one away, with the Miner's going into the locker room at the ice make up 2-0.  The 2nd period was a bit more intense, and POE coming to the net with a goal late in the second. The third period kept the teams quiet as the goaltenders shut down all shots, to end the game 2-1 in favor of the Miners, and the win to Miners goaltender, Matty Taylor.

The California Titans were the second game of the day on Friday for the Miners, and a tough one at that. Titans put up the first point, while the Miners answered back with an unassisted goal from forward JP Nolette. The Miners were shut down the remainder of the game and fell to the Titans.

Saturday, the Miners faced the Esmark Stars for their third game of the day, scoring one goal, Vlad Zhidikikh (Parsley, Medina), the Miner's with plenty of opportunities, couldn't close the gap, and fell to the Stars 4-1, with the loss to goaltender Erik Anderson.

The final game on Monday, the Miners faced the Anaheim Jr. Ducks, which left the Miner's unable to score in the first, but came out quickly in the second period to tie the game 1-1 with a goal from Billy Kowalski (Paradise, Wheatly). The back and forth action was intense as the teams fought hard to the third where the Ducks moved ahead and won the game with an empty net goal late in the third. Miners goal tending was split Anderson/Taylor for the loss.

The Pikes Peak Miners 18U AAA team headed to Blaine, Minnesota this past weekend to open their first showcase of the NAPHL season. The Miners came out of the gate firing, as they took on the Philadelphia Little Flyers at the Schwan's Super Rink. Philadelphia struck with the first goal, but the Miners answered back quickly with a goal from Davis (Norris), to finish out the first period 1-1. The second period was a tight back and forth game with only one goal scored by Miners forward Porter (Paradise), with the Miners headed to the locker room ahead 2-1 at the end of 2. The third period was a barrage of goals by the Miners with goals from Nolette (Linkov), Paradise and Booth to give the Miners a hefty 5-1 lead, with the Flyers getting one final in the third.

The Miners second and third games both on Friday showed the Miners splitting the day. The Miners beat the Arizona Bobcats 5-3 with goals scored by Paradise (Eubank,Anderson), Gums (Bever, Porter), Eubank (Boose), Nolette (Zhidikikh, Eubank) with Spears rounding out the game with an unassisted goal. The Miners then faced an evening game against the Madison Capitols, dropping the game 3-1 with the only goal from forward Medina (Gums).

Saturday the Miners faced fifth place Nationally ranked Chicago Mission, facing a tough but hard fought battle the Miners lost 0-4 for their only game of the day. The final day of the NAPHL Showcase had the Miners facing the HC Dallas team, and struggled to find the net. With the single goal in the game forward Jake Eubank (Zhidikikh), brought little relief to the 8-1 loss.

The Miners next NAPHL showcase will be held in Chicago in mid October, with local league games played vs. the Rocky Mountain RoughRiders. 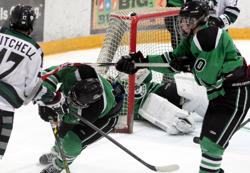 The Pikes Peak Miners met up with league opponents the Rocky Mountain RoughRiders on October 27th and 28th. Saturday night, both teams met at the Ice Centre at the Promenade in Westminster. The back and forth play proved to be a hard fought battle, leaving a 2-1 lead to the Pikes Peak Miners at the end of the first with Luke Boose (Christian Okpysh), scoring on the power play, and quickly putting up another goal by Miners forward, Christian Gums (Paul Norris, Vlad Zhidkikh).  The Miners came out in the second period ready, as Colton Davis struck an even strength goal (Billy Kowalski), leaving the Miners up 3-1. The Rough Riders answered back with two goals leaving the end of the second a 3-3 tie going into the ice make.

The third period the RoughRiders picked up two goals late in the third keeping the win for the first meeting of the season between the two teams. The Pikes Peak Miners fell a hard fought 5-3 with Erik Anderson in goal.

Sunday proved to be a tougher contest, as both teams came out to battle and created an exciting games for fans to watch. The RoughRiders scored first to get on the board with only 1:42  into the first, and closing out the first period in a tight 0-1 lead. But the Pikes Peak Miners answered fast and furious in the second by scoring two goals and leaving the Miners with the lead 2-1 with goals by Jake Eubank (Vlad Zhidkikh, Christian Gums) and burying a beauty was Billy Kowalski, short handed, (Christian Gums, Colton Davis), but with less than a minute left in the third, the RoughRiders came back to tie the game, and going into the ice make all tied up at 2.

Third period was a back and forth battle of the greens, and the RoughRiders found the back of the net late in the third to take the weekend and the 3-2 victory over the Miners.

Next up, the Pikes Peak Miners will face the Colorado Thunderbirds.